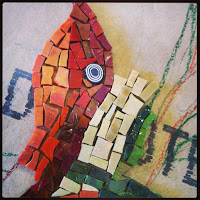 Smalti. For most mosaic artists, it's the creme of the crop as far as tesserae goes. The first time I was introduced to smalti, although I did not know what it was called at the time, was in my parent's church St Charles Borromeo in Oklahoma City. The walls are covered with amazing smalti murals. The first time I used smalti was in 2004 in a week long course at the Mosaic Art School in Ravenna, Italy, taught by renowned mosaic artist Luciana Noturni. I have to say the whole process of creating a mosaic in the double reverse method and using hammer and hardy, the way it was done in ancient times, was very intimidating and very time consuming. It was awesome to learn the process but at that time in my mosaic career, smalti seemed a little out of reach to experiment with, as it is very expensive.

Fast forward to 2013 and I met a couple who have become one of my favorite repeat clients. They have lived the most interesting life of art and adventure, traveling the world over and literally roadtripping from the Arctic Circle to Antarctica.  You can read more of their journey at From Polar Bears to Penguins. They came to me with a commission for a bathroom countertop and the design to be inspired by a book of drawings that they had gotten on their travels. The one they liked the best was a drawing of a tree with all kinds of creatures intertwined and coming out of the branches and roots. As an artist, this is just the thing that gets you excited for a custom project!

They had insisted on smalti and I tried to discourage them, as last I had checked, smalti was ridiculously expensive. As I researched, however, I found that since I had worked with smalti in Italy, there were several vendors that offered smalti here in the US and even some that imported it from Mexico. I chose the latter and when I ordered samples I was very impressed with the quality. Still pricier than glass tiles, but more affordable than I had anticipated. The only way I can describe smalti is that it is yummy. The colors and variations are luscious and it cuts like butter. The texture smalti creates in a mosaic is unlike anything you can create with vitreous glass tile (...says the owner of a mosaic glass tile company).

So we were all set and began the design process~ 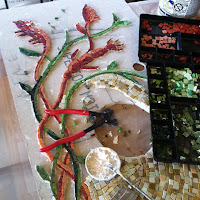 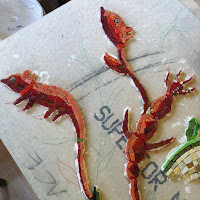 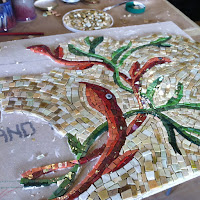 Several months ago, they contacted me to create another smalti mosaic.  This time for their garden. The subject was St Francis and I was very excited because from childhood, he had always been my favorite saint. Of course we went the non-traditional route and used a folk-art drawing as the inspiration and it turned out just perfect for their garden.

As I was writing this blog, I got an email from my clients asking when we can get started on adding more animals and birds throughout the garden. It's looking like more smalti is in my near future!