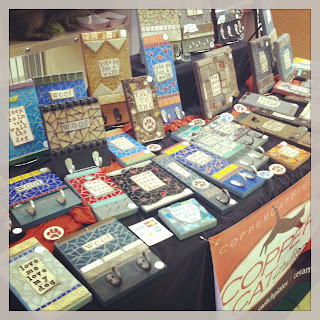 A couple of weeks ago, I decided at the last minute to have a table at the Nevada Humane Society's Doggie Palooza.  I know that I said I was going to limit my shows this year, but I couldn't pass this one up.  I'll do anything for the furry four legged (and at least one three-legged) kids.  When I arrived and was given my placement, of course it had to be against a wall of kitties.  So many little sweet faces looking out of their cubbies, hoping they are the next ones to be chosen for a forever home.  Two of my neighbors were Sweetie and Sara below.  Sweetie was near the bottom of glass and any time a child would come to the glass, she  would roll on her back hoping for a belly rub.  Sara most definitely captured my heart and if we didn't already have two cats at home I would have snagged her up immediately. 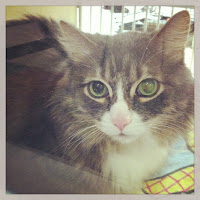 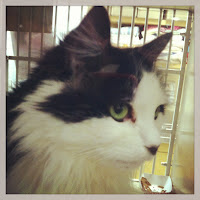 Reading her bio, I was puzzled that a cat like Sara has been with the Humane Society for more than two years.  Her daily routine does require medication, but she seems like she would be that perfect snuggly lap cat, with a good balance of attention-seeker and aloofness that makes a cat a cat.  I chatted up many members of the staff as well as volunteers and found out what a truly amazing place the Nevada Humane Society is.  In 2007 there was a shift in leadership at the NHS and they decided it would become a no-kill shelter.  What this means is that only animals who are ill or injured beyond help or those that are an extreme threat to others are euthanized.  They went from an adoption rate of less than 50% in 2006 to 94% in 2012!  And the numbers are staggering- 8,822 adoptions in 2012, 9,340 adoptions in 2011 and 9,668 adoptions in 2010.  Due to their high save rate and support of the community, Washoe County has become the safest place for homeless pets in the nation.  The NHS accomplishes their mission through quality animal care, comprehensive adoption programs, accessible low cost spay/neuter services and a free animal help desk that took over 25,000 calls last year.  They even have a program for feral cats where they humanely trap them, bring them in to be spayed or neutered and return them to their habitat. Under the care of two-yes two-veterinarians, the NHS performed 9,686 spay/neuters in 2012! 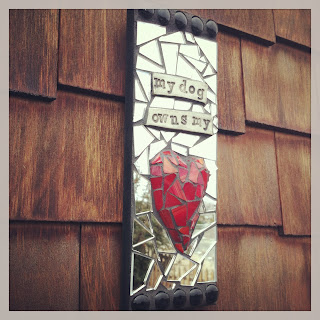 I didn't learn all of this at Doggie Palooza, but just being there in the facility prompted me to take the volunteer training they had the following week.  I am so excited and looking forward to spending a little free time giving love to the animals.  Of course they need dog walkers, help with administration, cleaning, etc.  You name it, they will take volunteers on any level.  I found that out at Doggie Palooza when I asked Nikole, who happened to be the Community Programs Director if I could come in and play with the kitties.  She said absolutely!  With as many as 200 cats in the facility at any one time, they are starved for attention and socializing, brushing, playing with the little red laser dot- all of these things can make the difference of bringing out their personality and having a better chance at adoption.  My focus for now will be making my rounds with the cats, but I have it in the back of my mind that I'd like to give Reiki to some of the more aggressive or troublesome dogs. We'll see where this leads... 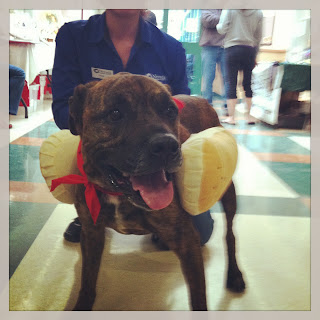 Back to Doggie Palooza- it was a very successful adoption day for the Nevada Humane Society. 21 dogs and 16 cats found forever homes.  My table was near a couple of the meet and greet rooms, so I had a close up look at families taking time to get to know their future pets and even bringing pets from home to play to make sure it was a good fit.

If you haven't been down to the Humane Society on Longley Lane, go check it out.  I was so impressed with the facility, the cheerful staff & volunteers, and what they do for the animals in our community.  If you have a few extra hours a month consider helping out.  I have a feeling I'm going to get just as much out of this experience as the animals that I am spending time with.

Choose a Path of Joy

I love this time of year.  Christmas decorations are put away, the rush of a wonderful holiday season is behind us and all of the possibilities of what the new year holds for us are dancing in our brains.  I feel like a caterpillar who has settled into my winter cocoon, ready for spring so I can bust out and fly! 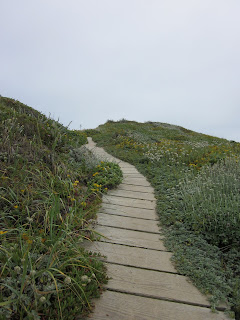 Last year was such a fantastic year for learning and discovering my path. It was once again a whirlwind of shows, a packed lineup of classes toward the end of the year, and being very blessed to have clients choose Copper Cat Studio to do much of their holiday shopping!  This was one of those years where the stars seemed to align and I received more clarity about my journey than ever.  Much of this clarity came from the rough patches.  I had shows that were flops, drama in professional organizations that I'm involved in, sketchy business "opportunities" and other obstacles.  I honor the universe for giving me these nudges and what I choose to view as a very clear direction of the path I am supposed to be traveling.  With that being said, all of those seem minuscule in comparison to losing my sister/best friend to cancer this past summer.  Boy was that a wake up call to the fact that life is short and the important things really are simple.

The idea of New Year's resolutions and about ultimately failing lofty goals is the the big joke in social media and elsewhere this time of year.  However, it is also timely to feel the need to reflect on the past year, see where your successes were, and also see where you could have done better.  To be honest with yourself about what is important in life, to be a little happier and to spread that happiness to those around you.  And I've come to realize that this is not just a state of being but a choice first. I feel like that is what our time on this planet is about.

With that in mind, my "resolutions" are simple.  To choose a path of joy and to make all of my personal and professional decisions with that intention as the basis.  This year I will only be in a handful of shows.  I will be teaching more classes, streamlining my online presence for national and international sales, expanding my mosaic line, taking on more Reiki clients and doing more things outside of my art that bring me joy.

Two of the biggies for me this year are making the decision to take my yoga practice to the next level and get my yoga teacher's certification, and working with my Reiki teacher and friend Denise of Sage Spirit Reiki & Coaching on a series of daylong workshops.  The first two workshops are already completely booked and we are looking forward to hosting several more throughout the year.

I have such gratitude for this life, for the opportunities that continuously come my way, for being able to practice my art all day every day, and for the love and support of my friends, family, husband and community.